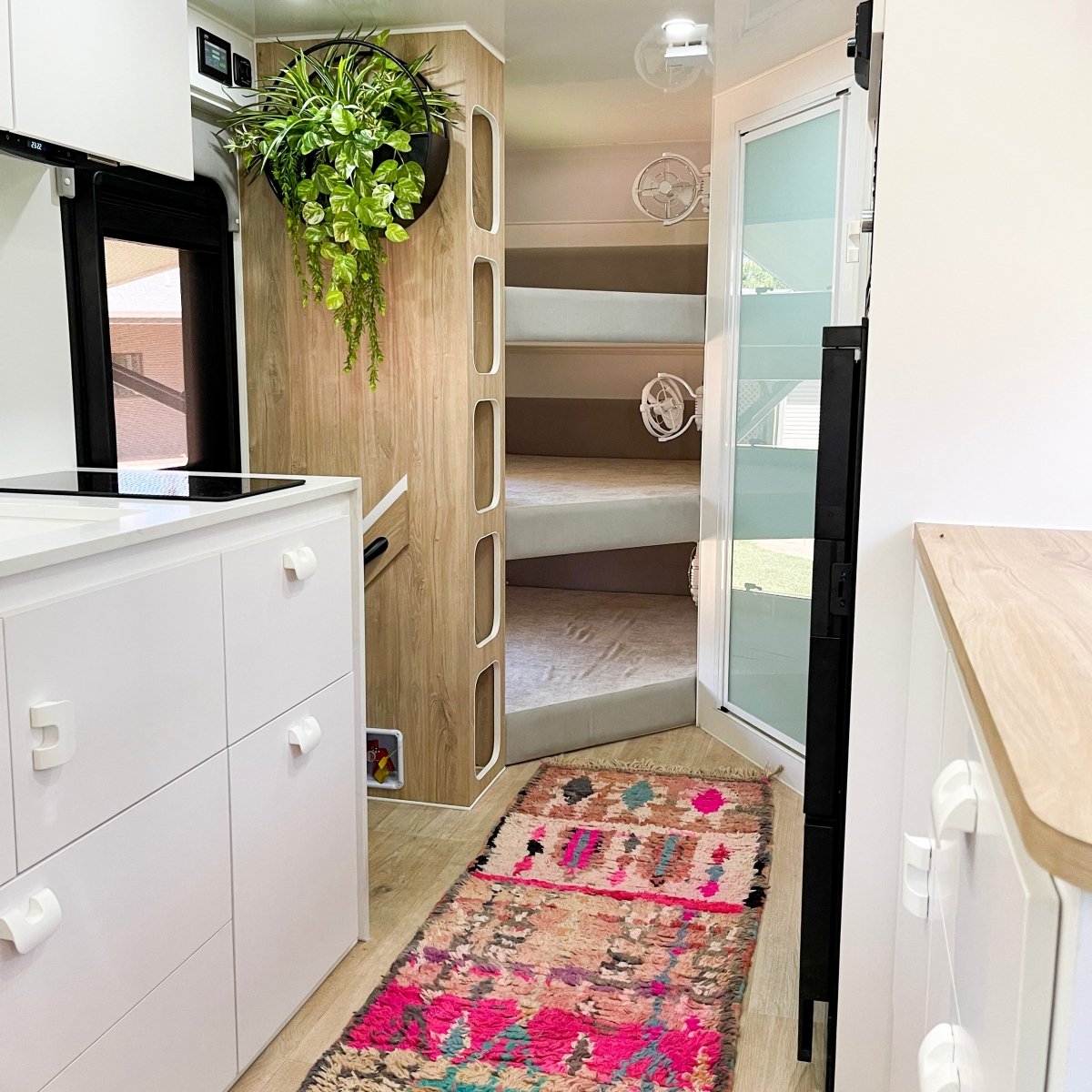 Royal Flair are gurus in the design and fabrication of high quality caravans in Australia – we’d know, we have put their vans to the test over the past few years.

They were established in 1975 by an Aussie family, and have since become market leaders in the caravan industry. Their philosophy of ‘small details make a big difference’ has made them stand out from the pack.

Their innovative approach to design and willingness to push the boundaries helped us create our new custom-built 2021 Eco Mate Family Off-road Caravan.

Our new van brings together Royal Flair’s strong focus on interior detailing and ‘naturally luxe’ approach to interior design, with our desire to create a space-savvy van that’s capable of going off the grid even longer.

Let us break down all the bells and whistles of our new baby as we step you through the sheer brilliance of all that is the unique 2021 Royal Flair Eco Mate Family Off-Road Caravan.

Our new caravan is the 2021 Royal Flair Eco Mate Family, which is part of the Aussie Mate series.

This new baby is a labour of love. When contemplating our new design we wrote a list of the things we wanted to keep the same; this included the bed, the airbag suspension, the aluminium chassis, as well as the general look and feel of our old van. There were a lot of things however, that we knew we could do better.

To pull off this goal we had to think big, so with the help of the legends at Royal Flair, this is exactly what we did. 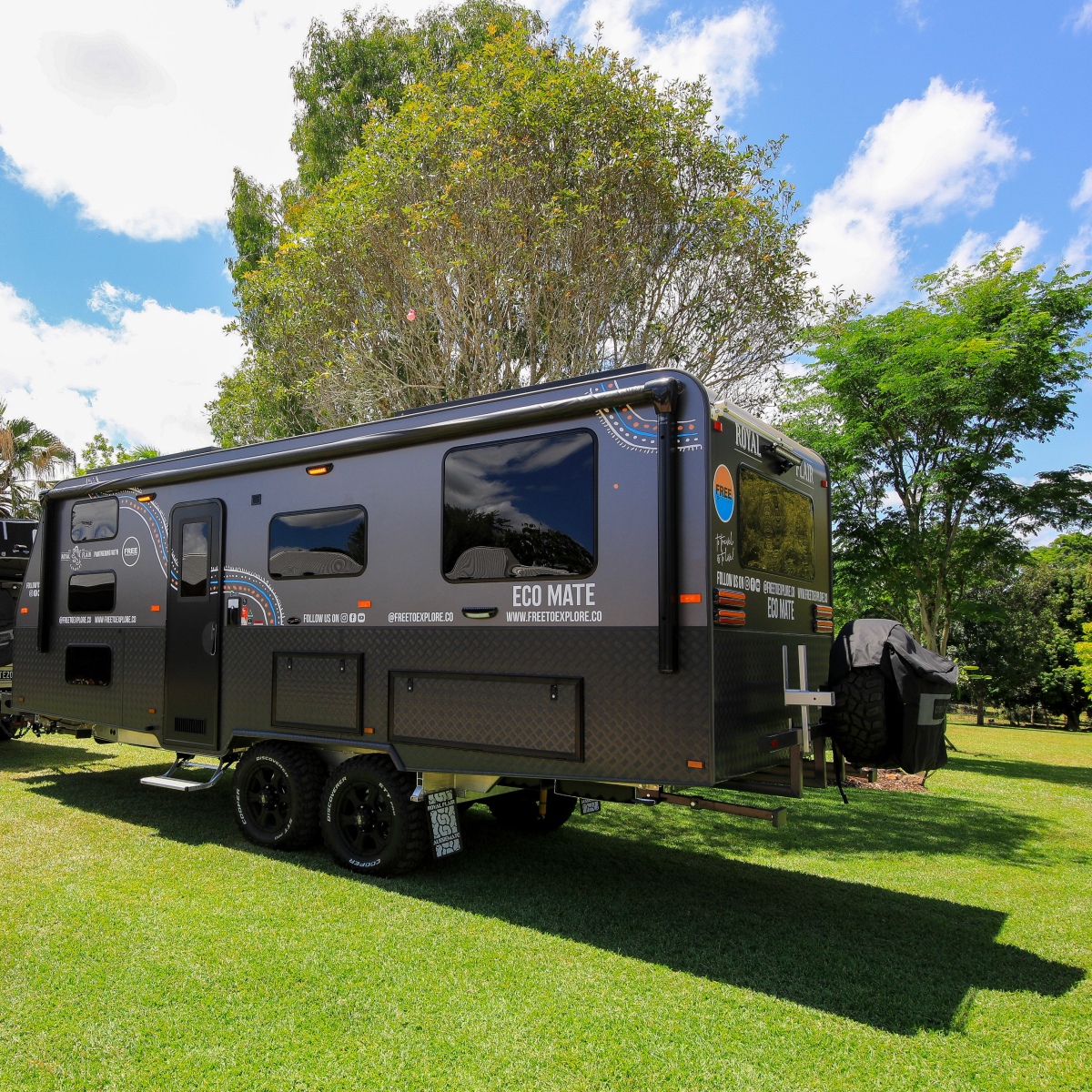 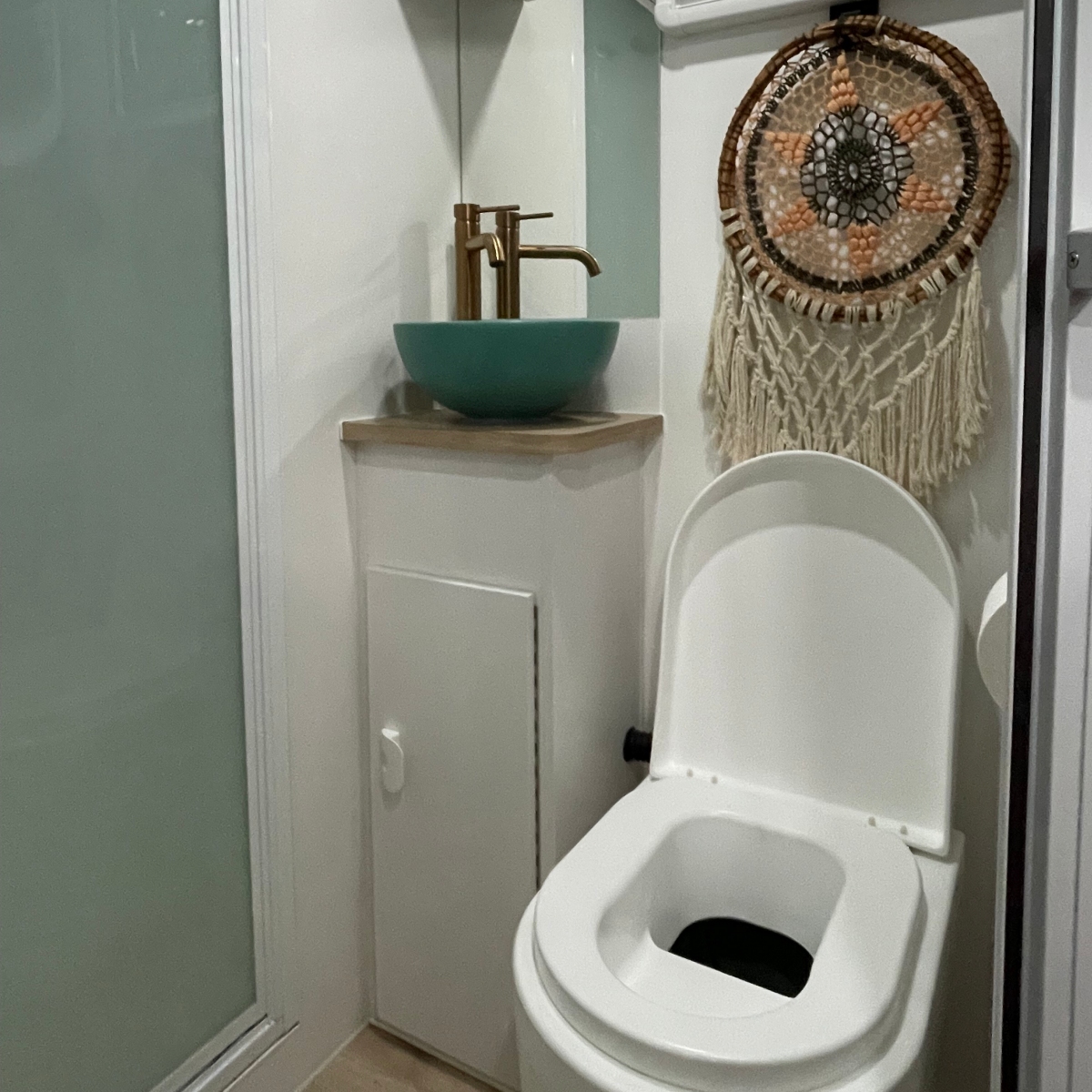 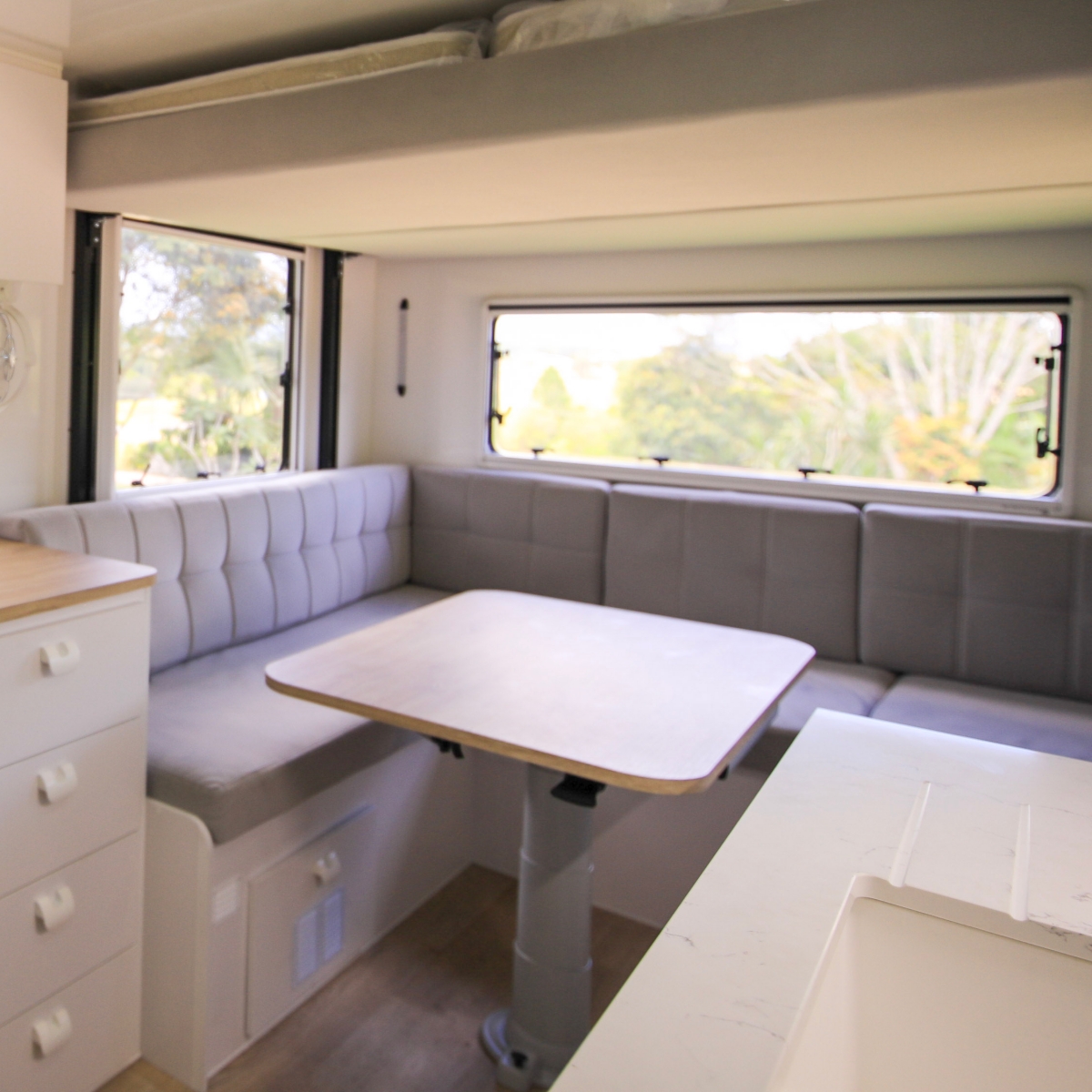 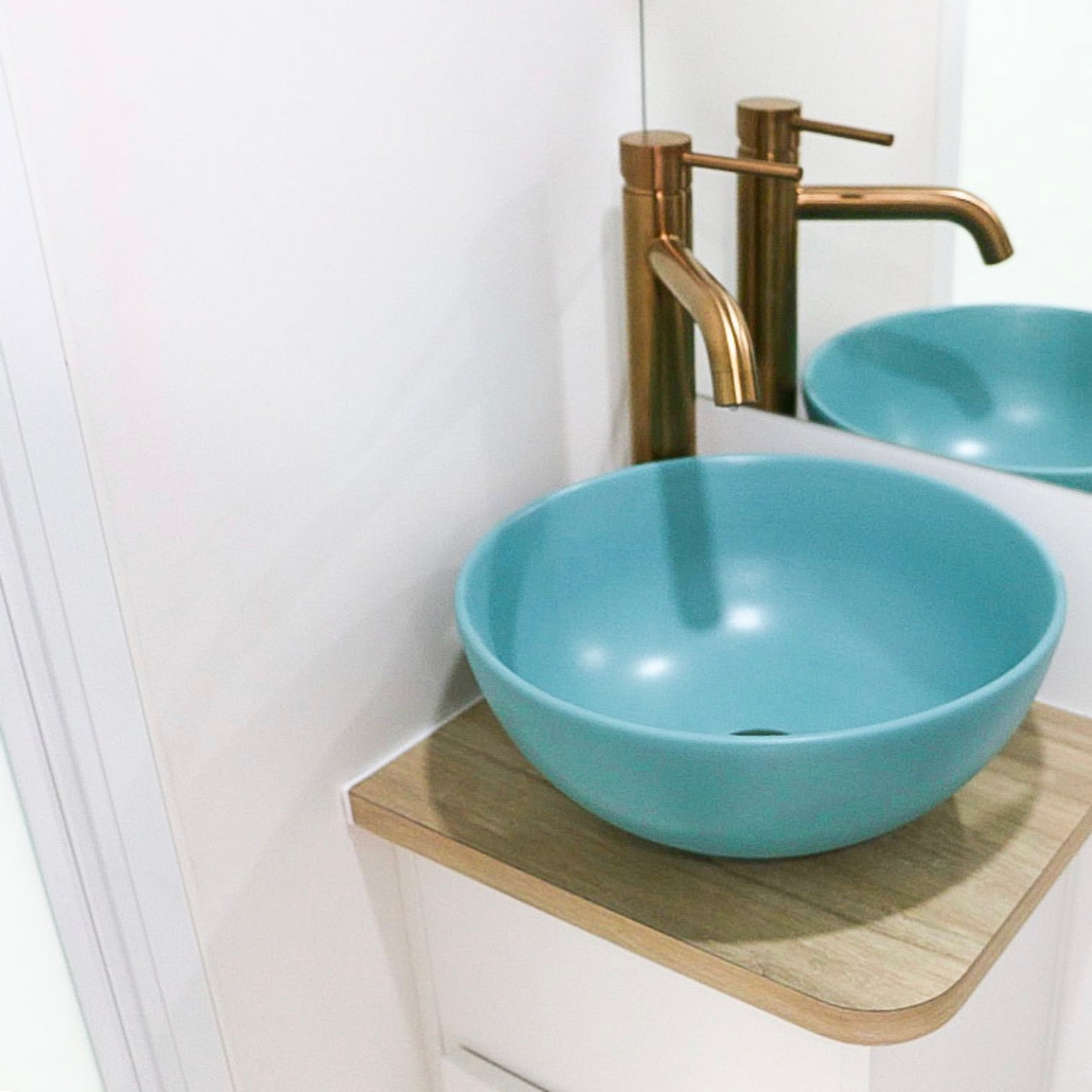 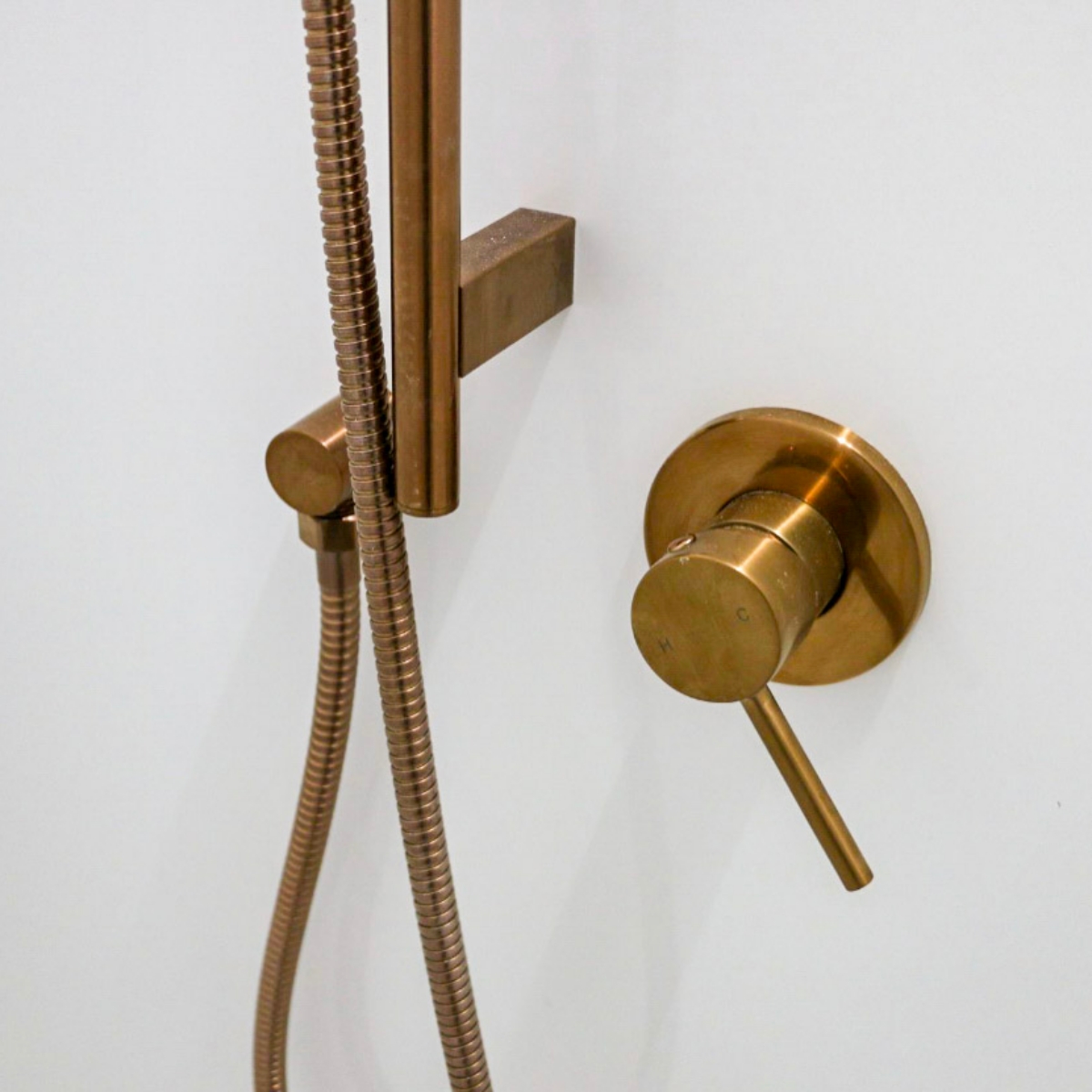 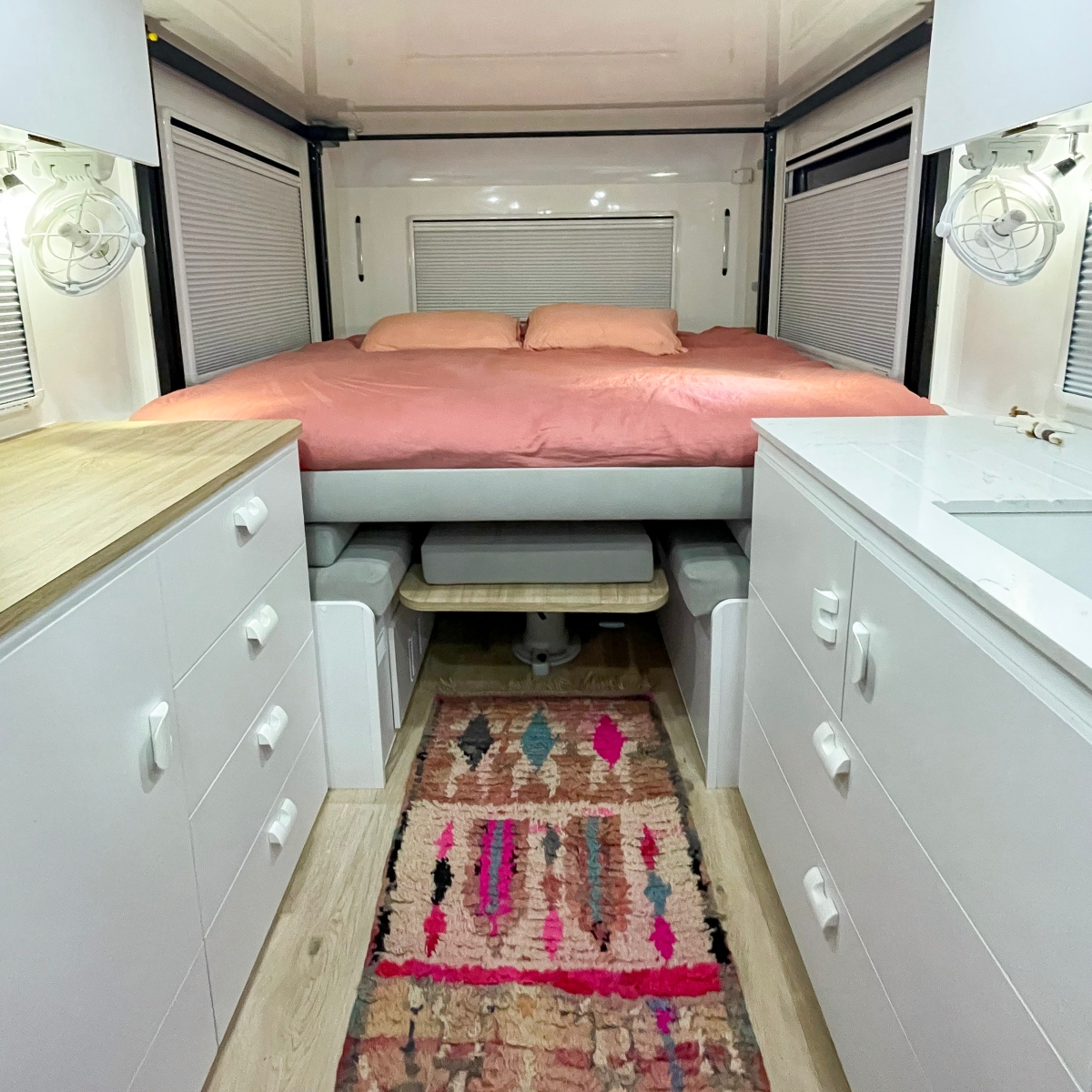 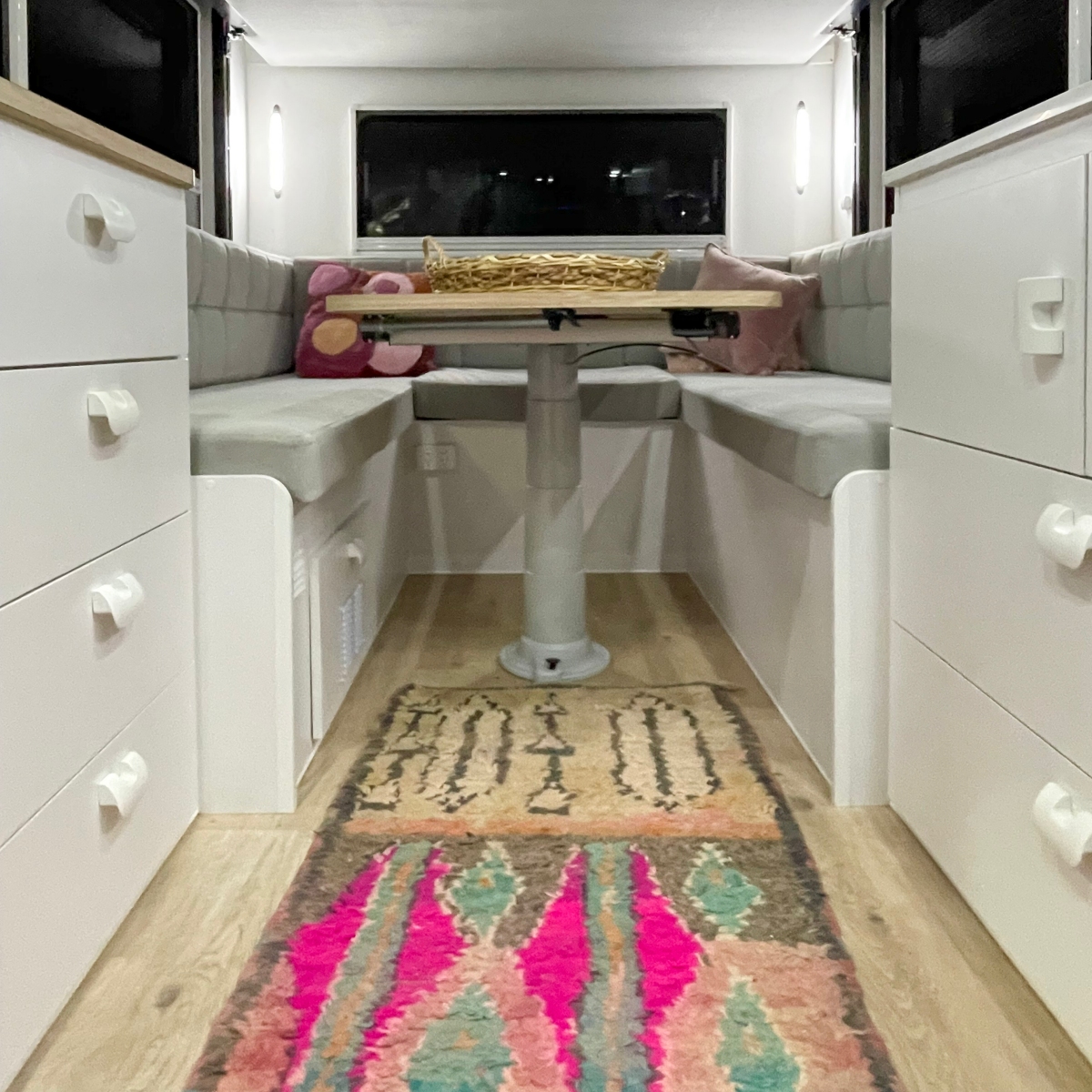 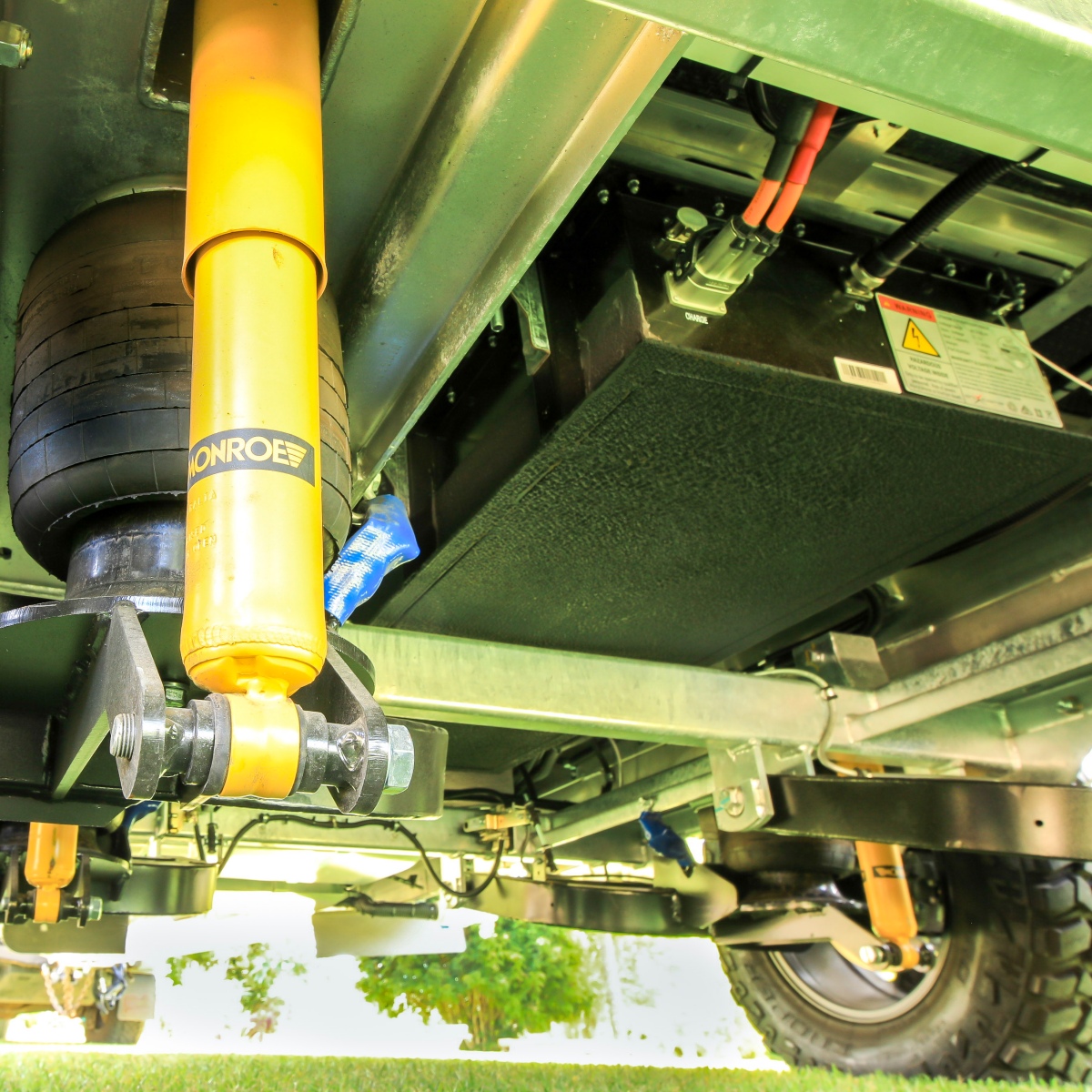 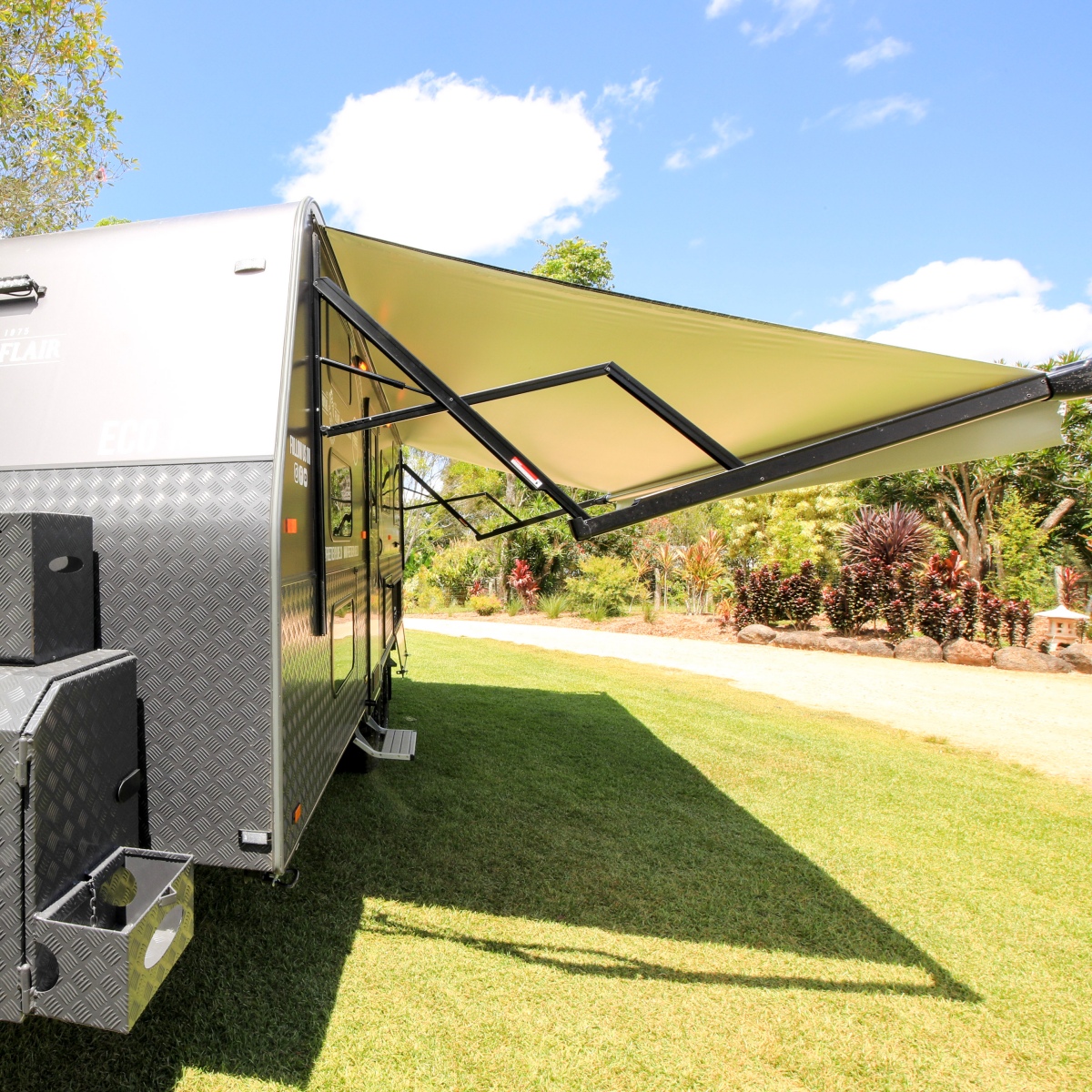 We wanted to create a lighter van so that we could increase the weight of things that mattered more to us – like additional water which helps us go off-grid longer than before!

To create a lighter body van we lowered the ceilings, reduced the length to a 21’6’’ family van, changed the external panelling to fibreglass, and switched from gas to solar power.

Although we limited space in some spots, we increased it in the places that mattered to us more. We removed the hallway to create additional space for the kids’ bedrooms which allowed for bigger beds and spacious cupboards at the end of their beds instead of the drawers they previously had. We were also more savvy with storage allocation and even taps this time round, all due to things we’d learnt from travelling 18 months on the road in our old van.

A few key elements that now allow us to go off-grid longer are our solar power, and our onboard water capacity which we upped by 130 litres (taking it to a total of 320 litres). This means we can now stay much longer in remote locations.

We also added in a 14.3kW battery system alongside a 5000 watt inverter which gives us far more power and lets us rely primarily on solar.

The battery is manufactured by OzXCorp , who came together to create a chassis mounted battery. This means it sits under our caravan inside the chassis and between the wheel base, which doesn’t eat up any room inside the van and makes for a more stable ride. It’s always preferable to keep the weight down low in caravans for added safety and stability.

Our new DCX Power Platform caravan battery is 14.3kWh, which is humongous and means we no longer need to worry about power the way we used to. We can go off the grid longer, use air conditioning longer, and we could even power other people’s vans if we needed to when off the grid. We have been able to ditch gas (which used to add heaps to the weight of our setup and was more fiddly to manage) and still use hot water (electric) and do all our cooking via electrics.

The battery system has a 5000W inverter which means we can power a number of devices at the one time without any concerns or issues. It is 48 volts in comparison to most vans which are 12 volts. Basically it’s a new and different type of system, which was a big part of the appeal for us and Royal Flair, who were both excited to push it to the limits and test out our theory of using solar power to exclusively power the van.

We combined this battery with commercial grade solar panels, meaning we have better efficiency in our ability to utilise the sun’s energy. We have teamed it with four 400 watt panels (1600 watts in total) and have designed the roof around the solar panels, rather than the other way around. Most people tend to have rooftop fans that pop up on the roof, along with TV aerials, and then they try to fit their solar panels around that. What we’ve done is make use of the space firstly for solar, and then arranged the other things on the roof around that.

We don’t have any TV aerials or hatches up the top other than our Caravan Sahara and Air Conditioner, which has meant we can really maximise the space for our solar panels.